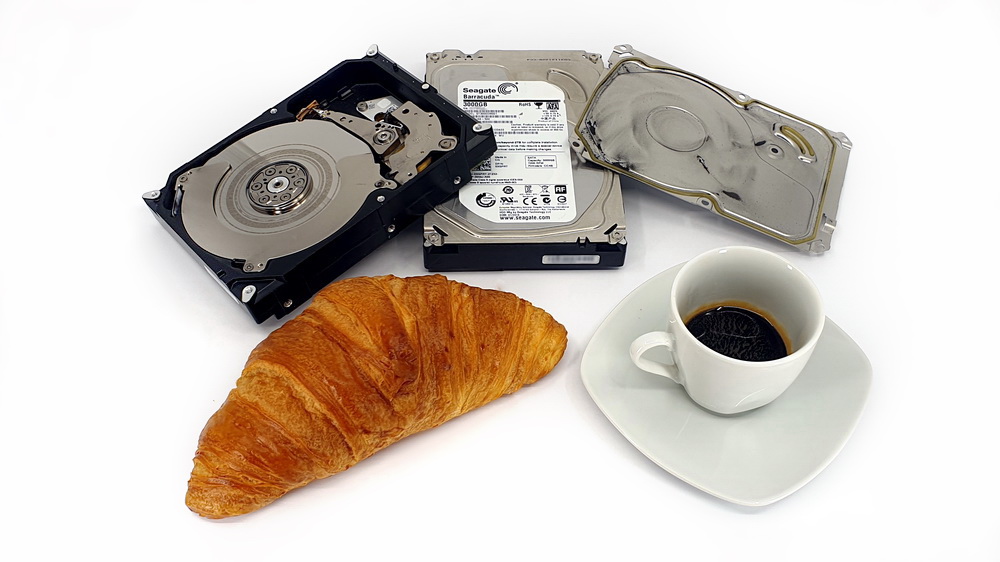 Issues with Seagate ST3000DM001 hard disk drives were once referred to as “Seagate DM - the morning croissant breakfast" by a work colleague of mine. Since then we call these cases “SCS (Seagate Croissant Scenario)”. And in the case where we were handling a RAID, we had to work with 5 or 7 Seagate DM croissants, respectively.

Every data recovery expert has probably encountered this - a crashed RAID, in urgent need for data recovery. However our client initially attempted to repair the corrupted RAID by itself, resulting in a shuffled order of drives. Scenarios of this type are countless in the field of ​​data recovery, and if such a scenario is combined with several Seagate ST3000DM001 disks, or similar with the xxxxxxDMxxx label, data recovery may sometimes be impossible and the client may lose several years of RAID work.

In this particular case, 5 Seagate ST3000DM001 hard disk drives were used in the NAS, RAID 6, so 2 drives could crash and data would still be available. We also had 2 previously replaced drives, also Seagate ST3000DM001. The client may have attempted to restore NAS functionality by self-help in previous NAS reports of defective drives, possibly having a drive that had a defect before, but had not yet completely malfunctioned in one slot.

If a NAS or server is reporting 1 or more inoperable drives, they need to be immediately replaced with new ones to allow the RAID to be recalculated and the device to continue to work flawlessly. Unfortunately, this did not happen at the last NAS warning signal. Failure warnings were ignored, and another drive failed, confirming Murphy’s Law. The data was therefore completely unavailable.

You could almost call it "Seagate DM Croissant Potpourri" as it was possible to try data recovery from both hardware-damaged Seagate ST3000DM001 drives and software-damaged drives (damaged service area) and one of the drives had a defective PCB. In this particular case, facing the most common defects which Seagate drive can have, all diversified about finding out which drive stopped working and at which position it was in the RAID at that time.

We have many years of experience in RAID data recovery and our overall success rate has been more than 90%. Although some cases cannot be resolved, our engineers’ approach never revolves around the “Too hard, takes too much time, too costly, low odds, so we write it off” - statement. This approach enables them to work relentlessly on the case no matter the end result.

Therefore, as with all other cases, we have also made every effort to recover data from the last 5 used drives. Unfortunately, 3 of them were damaged so badly that the data could not be recovered and because the NAS was in the configuration used RAID 6, with three non-functioning and non-recoverable drives, would have lost data forever.

The odds were pretty low as we had 2 drives that had failed previously. One of them had a blackened surface and the chances of data recovery were around zero. However, we knew from the NAS configuration files that this drive would be useless anyway, because one of the previously recovered drives was of a newer version (it replaced this drive in the past). So there was one last chance. Upon inspecting drive number 7 - Seagate ST3000DM001, clicks were heard. Furthermore any software modification of the ROM in order to gain access to the drive service area or user data failed.

After removing the reading heads of the disk and examining them under a microscope, it became clear that head # 2 was damaged. That kind of damage most often occurs when some part of disk drive platters suffers from damaged surface (manufacturing defect, shock ...) . So under drive normal working conditions, while the read heads attempt to read data from the surface, a gradual degradation of the heads takes place. Especially on some Seagate models, the surface will be also completely destroyed, resulting in the top layer of the plates becoming “ground to dust” and obviously the data layer would follow. Either way, in this case, the disk would be damaged irrecoverably.

Despite all these events that led to the inaccessibility of data on this NAS, by repeatedly cleaning the read heads we managed to gain access to the data, and after prolonged reading with specialized hardware and software tools, we saved the data from this latest Seagate ST3000DM001 disk.

RAID reconstruction followed, and considering that the last rescued disk crashed about a month earlier and there were several disk read errors, the data was neither entirely complete nor updated to the last version. Nevertheless we still managed to save the vast majority of data so the client was fully satisfied.

Finally, our recommendation is: back up important data, no RAID or other data medium alone guarantees 100% security of stored data, it only reduces the odds of data loss.

Did you experience a similar inconvenience? Contact us for free diagnostics.