We keep up with the latest trends. We were one of the first to purchase the PC-3000 Portable III

This is currently the only comprehensive solution for data recovery from NVMe SSD drives. The portfolio also includes support for SATA, IDE and USB drives, flash drives, RAID and soon also SAS drives. 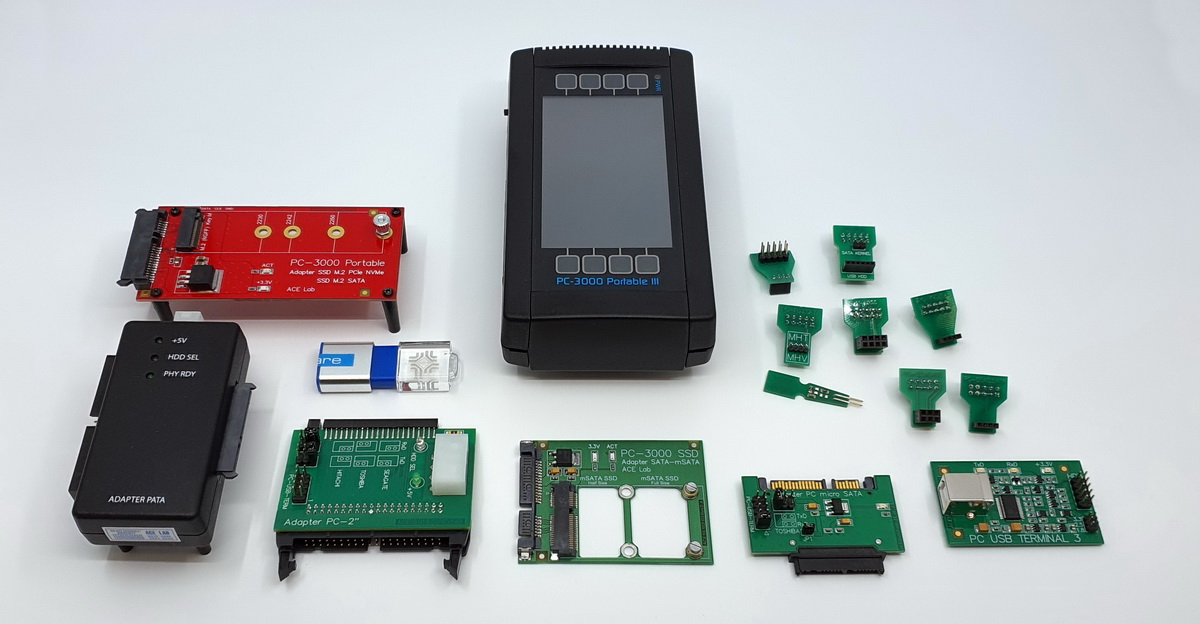 Acelab is a world leader in data recovery. Thanks to our long-term cooperation, we can offer clients top services and use the world's most modern technologies in this field.

This on-site delivery, versatile and portable toolkit is presently second to none in the world of data recovery technologies. We use it as a supplement to other technologies used, which allows us to expand capacity and implement orders outside our workplace. However, it can also fully serve on its own, as it offers all the benefits and technological tweaks offered by the PC-3000 Express and PC-3000 UDMA. It should soon be possible to extend this "magic briefcase" to include SAS disk support. The PC-3000 Portable III was discussed at last year's Acelab conference and has now hit the market after a long development. An article about this conference can be found here.

SSDs are a completely different level in terms of data recovery by comparison with conventional HDDs (mechanical drives with platters). HDDs have been used in computers since the beginning of the silicon age, SSDs have only hit the scene in recent months, when memory prices have reached a reasonable price. Until 2019, SSDs in computers and other devices were used only minimally, often as a system disk, and the HDD was used for data. The main obstacle to their development was the price per 1 GB, which was many times higher compared to a classic HDD. Mostly it was also an SSD on the SATA interface, which has its speed limits.

The decrease in price and the use of the PCIe NVMe interface, direct communication between the SSD and the computer, brought completely new possibilities. Just in comparison: the SATA interface offers a maximum transfer rate of 6 GB/s, the latest PCIe 4.0 then 32 GB/ s. Version 5.0 with a transfer rate of up to 64 GB/s is already planned. For most people, a SSD with a capacity of 500 GB - 1 TB is enough, and when the data whizzes at a speed that can not be achieved with a classic HDD, the system will boot up in a few seconds, just in accordance with modern hectic times, the user is satisfied. At least until the SSD breaks down.

Data recovery from SSDs, especially from NVMe SSDs, has so far been severely limited by the absence of suitable technologies. PC-3000 Portable III changes all this.

Data recovery at the client. Is it possible for all types of defects? What are the options?

First you need to determine the type of defect. In the case of logical defects (this is a defect that can be solved at the software level), it is possible to solve most of the problem directly at the client. In some cases, however, this can be a time-consuming solution.

In the event of a disk hardware failure, the options are limited by the type of damage. Additional equipment is required to address many hardware disk defects. In many cases, it is possible to set up an improvised laboratory at the client's place, but this is often a more time-consuming solution.

PC-3000 Portable III allows us to work with the following media and file systems:

Data recovery is the last solution. Back up and you won't need it

I wrote this article as a brief introduction to a unique product that will certainly not find application in every IT company, but is an important step for specialized laboratories and forensic specialists to support increasingly widespread SSDs, especially newly supported SSIs for PCIe NVMe. We already have this unique novelty from Acelab in our equipment, so we can offer services which are currently offered by only a handful of companies providing data recovery (the article was created in the first half of March 2020).

I always urge everyone to back up their data consistently. Back up and save yourself a lot of worries if your data medium fails. Here are some tips on how to back up your data.