For users, a new breakthrough, higher capacity and speed. For a data recovery specialist, various new types of NAND memories, controllers and firmware 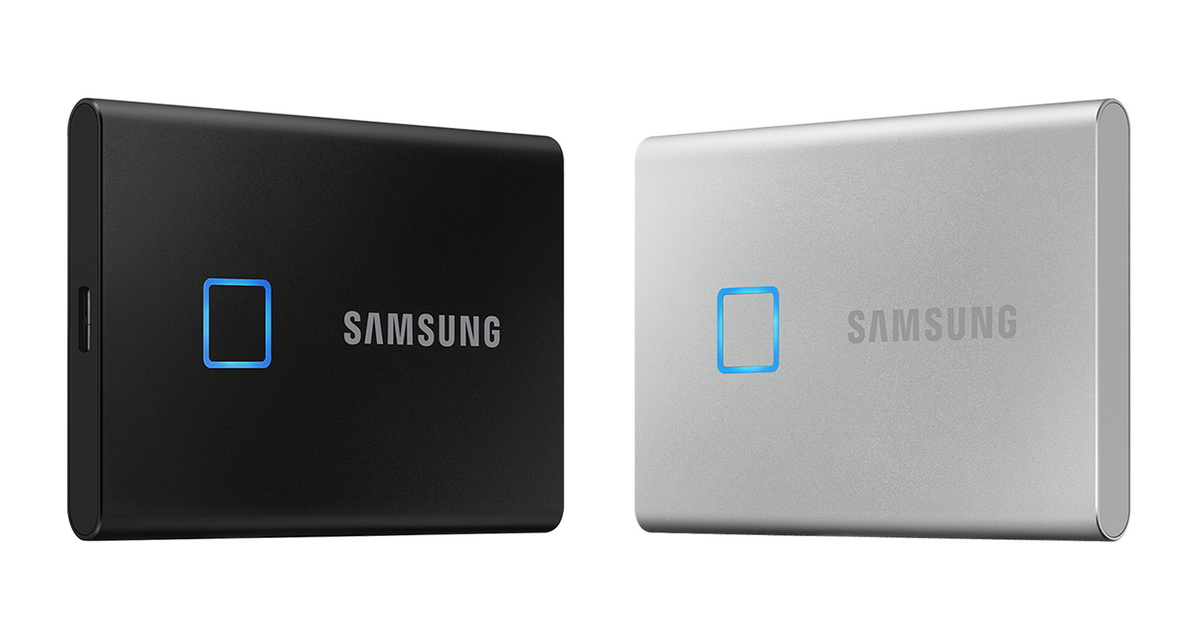 Of course, modern high-capacity NAND memories do not only concern SSDs and flash drives, but also mobile phones and memory cards. Manufacturers at CES presented the innovations of all these storage media. The biggest boom, however, lies currently with SSD and external SSD. The latest PCIe 4.0 interface boasts speeds of up to 7 GB/s. USB 3.2 Gen 2x2 has its technological limits at 2.5 GB/s. Compared to the still used SATA III interface, these are diametrical differences in bit rates.

Samsung introduced an external SSD labeled T7 Touch, which you connect to your computer via USB-C or older USB-A. The transfer rate of 1050 MB/s for reading and 1000 MB/s for writing is approximately double that of its predecessor Samsung T5. Samsung does not take the security of user data lightly, and you can encrypt data on the drive at the hardware level using AES 256, which can be replaced with a fingerprint on the T7 Touch. The fingerprint reader is located on the top of the drive. As the Samsung T7 Touch will be available in 2TB / 1TB / 500GB capacity, and at 85 x 57 x 8 mm, this is a truly mobile way to handle your data.

data recovery from all types of storage media

Western Digital has not lagged behind and has introduced several devices from both WD and Sandisk, that belongs to WD since 2016. We have written about the WD_black P50 SSD, which is one of the first external SSDs to use the USB 3.2 2x2 gene. This drive is designed primarily for players and will be available in 2TB, 1TB and 500GB capacities. In addition, WD presented the WD_black P10 and WD_black D10, both designed for the Xbox. But inside these you will not find the SSD, but the classic HDD. With regard to their use, the player may be looking for a cheaper version with higher capacity and a classic HDD inside than the more expensive SSD. The D10 will also be available in 12TB versions.

The brand Sandisk boasts a 1TB Ultra Dual Drive Luxe USB Type-C flash drive. It is a dual connector drive, which means that you connect the drive at one end to more modern devices equipped with a USB-C connector, and at the other end to an older type of USB with a USB-A connector. This flash drive offers a really wide use across contemporary computers, mobile phones, tablets… Flash drive is in metal design and its presented version with a capacity of 1TB is not the only one offered. It is also available in 512GB, 256GB, 128GB, 64GB and 32GB. The manufacturer reports sequential read speeds of 150 MB / s.

Sandisk introduced another interesting novelty. Sandisk ibi - a local user storage that acts as a personal cloud storage for photos and videos. The device is intended to store (backup) photos and videos from phones, social networks and cloud storage, either from a PC or a Mac. Your device has features for managing and sharing content, privacy settings, and even more. It should be noted that many people store photos, for example, only on Facebook and do not have a local copy. This cannot be considered as a safe way to keep memories, and not only for these can Sandisk ibi be a solution to back up valuable data without undue effort. Offered capacity is 1TB.

Phison presented up to 8TB SSDs using PCIe 4.0. Respectively capacities of 8TB using M.2 NVMe interface and up to 16TB using SATA. Phison also manufactures controllers that are an integral part of every SSD and provide memory module communication with the drive interface on your computer. It is in this field that Phison holds the lead since they were the first to introduce a controller communicating with PCIe 4.0. The truth is that you can't find this version of PCIe on computers today, but from a commercial point of view, Phison demonstrated how timely they released the new chipset with AMD's Ryzen Threadripper in view, which will bring PCIe 4.0 to computers soon. AMD says the platform counts among the most powerful desktop processors, which, combined with fast SSDs based on the presented Phison chipset, would be another dramatic step in transfer rates. For Phison, this means a significant advantage over the competition.

For the user, it is child’s play. Until something goes wrong and lost data needs to be recovered.

From the user's point of view, these are all technological delicacies that we could only dream of a few years ago. As long as everything works, we can store and move our data at unprecedented speeds. However, no data medium is flawless and until all users regularly back up their data (and they probably never will), our data recovery and data rescue services will still be needed. In the area of ​​data recovery, however, all these technological innovations are more of a technological complication, when the first customer comes up with a data medium from which he needs to save or restore valuable data. From our point of view, it is mainly a problem of memory modules, controllers and used firmware, which ordinary users are not familiar with. Therefore every user should keep in mind the rule that applies from the very beginning of the silicon age: regular data backup is the best prevention from losing important data.